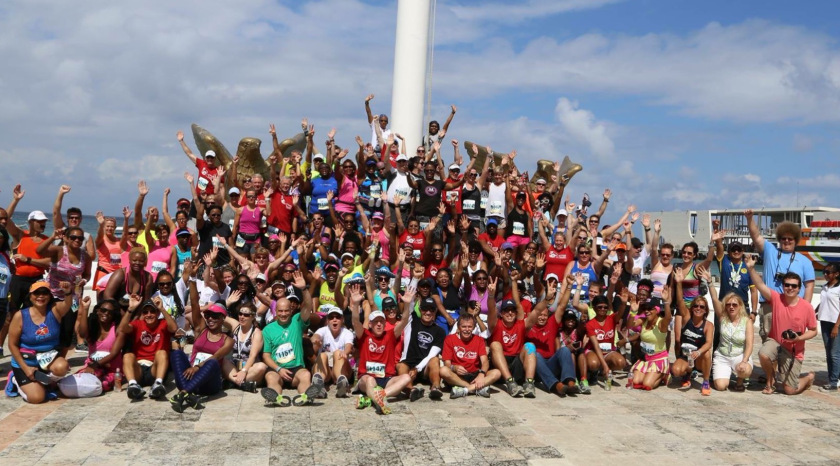 Three months ago, I embarked upon an exciting journey. It was a runcation with Black Girls Run! through Run For Fun Cruise Tours. Yes, Run-Cation! I know it sounds like an oxymoron but I had a fabulous time. Run For Fun Cruise Tours (RFFC) is a family run business that provides structured runs/races in various Caribbean locations. This year RFFC partnered with Norwegian Cruise Line to drop the runners off in: Ocho Rios, Jamaica; Georgetown, Grand Cayman; Cozumel and Costa Maya, Mexico. First of all, I have to say that the scheduling of the trip for this Northeast resident was perfect. There is no love lost between winter and I, so by the time February rolled around I was completely over the winter elements and was ready for some fun in the sun.

Pre-Cruise: Now before we even set foot on the ship, many of us ran the A1A Publix Fort Lauderdale Half Marathon. It was a lovely sunrise race with a great post race party at the end. I’ve never seen so much food at the end of a race. This will go down as one of my favorite Half Marathons. And check out the bling. 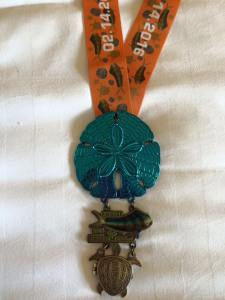 Ocho Rios: One stop driver!!! I loved Ochee. After the ship docked we gathered in the downtown area and picked up our numbers and timing devices. Yes, this was a timed 5K race. RFFC are no slouches. While we were waiting for the race to begin I saw people gathered around a store across the street. I went to investigate because whenever I would see these splintered groups there would be rumblings and rumors of WiFi. But alas there was no WiFi, they were lining up to use a bathroom – the original runner’s treasure. Soon enough it was race time. The going was a little rough because it was 86 degrees and my body was still used to running in freezing temperatures. We ran through the city and there were hydration stations with nifty plastic baggies filled with sports drinks. I actually really liked the baggie concept better than the cups we usually get. Things were going well and after the first two miles it was time to run the mile long hill that we had heard about. They told us that it was steep. But hello, I just wasn’t ready for this hill. Not at all. First of all, it wasn’t a hill. It was a mountain … namely Mystic Mountain. All running ceased after ten steps and I hiked that final mile. But of course I ran the last 50 yards to the finish line because that’s mandatory. You always, always, finish like a champ. There was a nice little party at the top of the mountain and I got a chance to relax before heading back down … on a chairlift. The other three options were, to zip line down, take a rollercoaster or walk. For the condition that I was in, the chairlift seemed to be the most civilized, until my buddies and I got on it. It was pretty high and I screamed like a baby. We spent the rest of the day eating (at Mama Marley’s) and shopping. I enjoyed Jamaica there is a certain energy there that just isn’t present anywhere else. Good Riddims and Vibe. 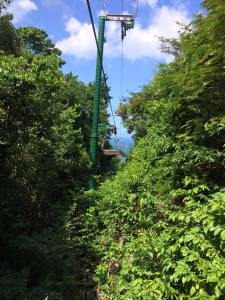 Grand Cayman: It was my first trip to Grand Cayman. What a breathtakingly beautiful island. We did a three mile run through Georgetown’s busy downtown and a residential area. The finish line was on a quaint little beach. It was great, you could literally just run right through the finish line and into the water. We hung out at the beach for a while and then headed off to Stingray City. Not my idea. I was duped. The Stingray City excursion coordinator said we would go to seven mile beach afterwards.The boat ride to the sandbar where the stingrays are found was beautiful. Since I had no intention of getting up close and personal with the stingrays, I stayed on the boat and took pictures of my friends, who were having quite the time kissing and canoodling with the stingrays. I’ll pass. Steve Irwin anyone? Anyway, there was no Seven Mile Beach for me, we barely had enough time to make it back to the ship. 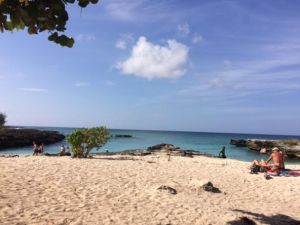 Beach at the finish line

Cozumel: The island officials were excited to see us and created a great race atmosphere with music and announcers. I felt as though I was at a big race. We arrived in Cozumel later than our other destinations and the run didn’t begin until around 11:00 A.M. The sun was blazing but at 2.25 miles, the run was nice and short. This was my first visit to Cozumel so I knew I would do something exciting with the rest of my day. You might be wondering if I visited the Amazing Secret River or the Mayan Ruins of Tulum. The answer would be a resounding “NO.” I spent a inordinate amount of time at Starbucks. And not because the service was just that slow in Mexico but because there was WiFi at Starbucks. YEEESSSS!!! So my buddies and I sat in air conditioned loveliness and made lots of contact with the world we had left behind. We wound up having a nice relaxing day strolling around the area shopping. 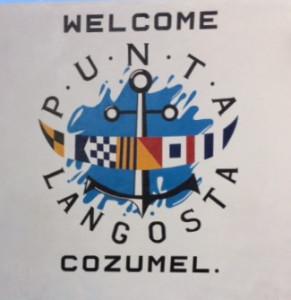 Costa Maya: There was a 5K slated for Costa Maya and much of it was run along side the beach in Mahahual. We ran by an array of vendors and ended our run at a wonderful establishment where they gave us a room to change into bathing suits so we could enjoy the rest of the day on the beach. And enjoy I did. I ordered some nachos from my beach chair and they were hands down the tastiest nachos I have ever had. I’m salivating right now just thinking about it. Some of the more adventurous members of the group did some paddleboarding. You should know by now that I am not in that number. However, I had signed up for yoga but it didn’t happen because I became one with my lounge chair. This was another beautiful day in Mexico. Run and lounge. What could be better than that? 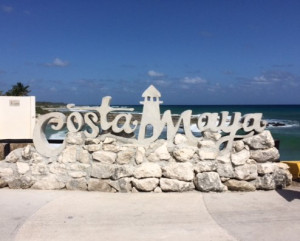 The Getaway: I had bumped into an elderly couple at the airport on my way to Miami. They asked if I was cruising and informed me that Norwegian is for older people and for that reason they were cruising on Carnival. Well excuse me grams and gramps!!!  That said, I enjoyed the Norwegian Getaway. There was lots to do on the ship between ports and at night. One of the highlights of the ship was Bandaoke. When I saw it on the schedule I gave it the stink eye. What happened to good old Karaoke? But Bandaoke turned out to be the cat’s meow, the dog’s bark and the bird’s chirp. Yes!!! Instead of performing to a track, you sang with the house band. And what a band!!! And that’s all I’m going to say about that. Oh and in light of the old timers referenced above, I have to mention that Norwegian’s embarkation party in Costa Maya blew Carnival’s out of the water. No pun intended. The Carnival cruisers were looking really pitiful watching us Wobble our way back onto the Getaway. Ha!!! Norwegian also arranged for the RFFC group to tender before the other passengers in Grand Cayman. That was pretty cool. 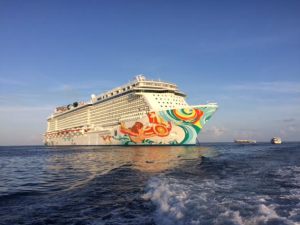 In conclusion, this was a fabulous trip. The Newton Family aka RFFC took great care of us. And even as I type they are cooking up another great trip for 2017 that will include the ports: Roatan; Belize; Costa Maya; and Cozumel. 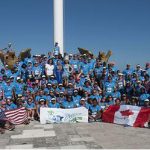 RUNNING AROUND THE CARIBBEAN WITH BLACK GIRLS RUN!Notes & Quotes 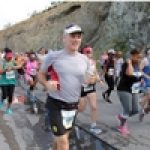